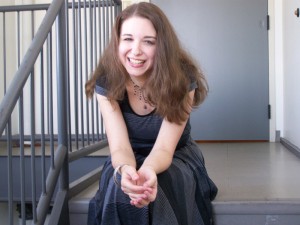 Katharine Tarkulich has been designing costumes since she was a child. She would watch a movie and become inspired by a time period or country, pour over research at the public library, and sketch her own versions of costumes for the different characters. While getting her BA in History and a minor in Flute Performance at the University at Buffalo, she took a general class in theatrical design and fell in love with the basics of the design process (reading and analyzing plays, creating abstract collages and sculptures and then interpreting those sculptures, etc.). Continuing on to her first costume design class, Katharine was able to design two shows prior to graduating and went to KCACTF with her Merit Award-winning design from her first show, The Playboy of the Western World.

After graduation, Katharine became the assistant designer/wardrobe supervisor for several shows at Buffalo’s Irish Classical Theatre Company. At U/RTA’s in early 2005, she was offered a slot at CSULB and moved cross-country to Long Beach, CA where she honed her artistic and technical skills, both through course work and designing. There she also discovered the joys of fabric dyeing. Katharine began doing outside work on short films and for the dance department at Santa Ana College prior to graduating.

Upon receiving her MFA, Katharine worked as an independent designer on both sides of the United States before deciding to move back to the East Coast. Now settled in CNY, she continues to work with private clients, nonprofits, and educational institutions to provide creatively designed and well-built costumes.

Katharine also has launched Originals by Katharine Tracy, an online shop of fine handmade clothing, costumes, and accessories, where she marries her love of vintage and the fantastic into wearable works of art.

MFA in Costume Design from Cal State Long Beach
BA in History, minor in Flute Performance from University at Buffalo